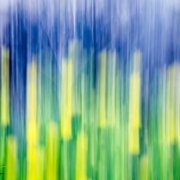 Is panning photography for wildflowers a thing? Sure! Especially if you are a nature photographer wanting a camera technique to create some spectacular, fine art images. I don’t mean panning as in searching for flecks of gold like the miners of the forties. I mean panning with your camera to create images like the one shown here.

The panning method I employ challenges the traditional use and definition of panning in photography. Traditionally speaking, panning with your camera involves following a moving subject in order to capture it sharply while conveying a sense of movement through the streaking of objects in other parts of the image.  You’ve likely seen photos of race cars, cyclists, and other fast moving subjects that illustrate this concept. Further, most definitions indicate panning is only horizontal. While I can agree with these two tenets, I think there is more!

I contend that 1) panning is not just a horizontal movement of the camera and 2) motion blur does not require the subject to move . Defining panning as “moving the camera through the scene, in any direction: horizontally, vertically, diagonally or even in a circular motion”, expands the creative options for use of this technique. When making Wildflowers at Monahans Sandhills, as shown above, I moved (panned) the camera vertically, from top to bottom, while pressing the shutter button. Likewise, in the following image, the movement is vertical.

My panning method also challenges the traditional use and definition of motion blur in photography. The combination of fast moving subjects and slow shutter speeds often results in a photo with streaking. Varying the speed of the subject and shutter changes the amount of streaking. While some motion blur images generally result from a failed attempt to capture a moving subject, some are intentionally blurry in order to convey a sense of motion.

Motion blur, by definition, seems to mean blur resulting from motion. Many photographer utilize a technique which involve keeping the camera perfectly still while the subject moves around.  The subject’s motion, thus results in a blur. I suggest the motion causing the blur may be a moving subject or not. The motion may actually be that of the camera. Moving the camera while pressing the shutter button can create blur when the shutter speed is slow enough. The thistle pictured below appears to be blowing in the wind but it was actually a very still morning when I shot this. By moving the camera, I created the illusion of movement.

These photographic motion techniques allows you to make dynamic images from static subjects. However, not all blurry images are equally appealing. With some practice, you can learn to create pleasing blurs as I discussed in my post Flower Photography As Art: Pleasing Blurs.

Join other photography enthusiasts and get tips, free eBooks, and updates on Carol’s latest adventures right to your inbox.

This site uses cookies. By continuing to browse the site, you are agreeing to our use of cookies.

We may request cookies to be set on your device. We use cookies to let us know when you visit our websites, how you interact with us, to enrich your user experience, and to customize your relationship with our website.

Click on the different category headings to find out more. You can also change some of your preferences. Note that blocking some types of cookies may impact your experience on our websites and the services we are able to offer.

These cookies are strictly necessary to provide you with services available through our website and to use some of its features.

Because these cookies are strictly necessary to deliver the website, refuseing them will have impact how our site functions. You always can block or delete cookies by changing your browser settings and force blocking all cookies on this website. But this will always prompt you to accept/refuse cookies when revisiting our site.

We fully respect if you want to refuse cookies but to avoid asking you again and again kindly allow us to store a cookie for that. You are free to opt out any time or opt in for other cookies to get a better experience. If you refuse cookies we will remove all set cookies in our domain.

We provide you with a list of stored cookies on your computer in our domain so you can check what we stored. Due to security reasons we are not able to show or modify cookies from other domains. You can check these in your browser security settings.

We also use different external services like Google Webfonts, Google Maps, and external Video providers. Since these providers may collect personal data like your IP address we allow you to block them here. Please be aware that this might heavily reduce the functionality and appearance of our site. Changes will take effect once you reload the page.